DRAMATIC IMPROVEMENT OF VENOUS DERMATITIS AND VARICOSE VEINS AFTER EVLT

This is an 84 year old Caucasian man who was referred to us by his daughter. He has had very long standing chronic venous congestion of his legs with many of the late manifestations of the untreated venous hypertension, including swelling, chronic skin changes like venous dermatitis (inflammation), brownish red pigmentation and lipodermatosclerosis (loss of fat and thickening of the skin). In addition, he had extensive spider and blue veins and non-healing bleeding varicosities in his left ankle. Fortunately he had not developed venous ulceration yet. The after pictures were taken only after 4 weeks following the laser ablation (EVLT) of the Lesser Saphenous vein of the left leg. Without further treatment, a dramatic improvement is noted in the swelling of the leg, bulginess of the varicosities, inflammation of the leg as well as spontaneous healing of the bleeding at the ankle. However, most of the skin pigmentation may not be reversible unfortunately. 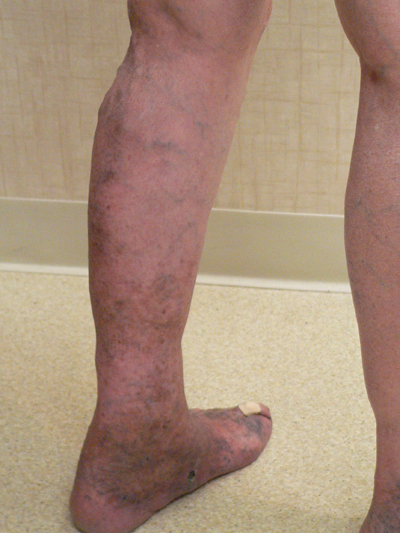